Forte Kochi, one of the best Heritage Hotels in Cochin, Kerala, India

Brimming with regal heritage, Forte Kochi Luxury Hotel is gracefully tucked in the glories of the past.

Step into a bygone era as you explore one of the best Heritage Hotels in Kerala, India.

Forte Kochi shines like a pearl among the hotels in Fort Kochi - one of the oldest cosmopolitan port cities in the world.

A town so strategically placed that many a battle had been fought and many a ship burnt to lay claim to its generous shores.

Fort Kochi has welcomed weary travelers for centuries from Arab and Chinese traders to Jews seeking shelter and new lives. The town has witnessed many a conquest and has been colonised by the Portuguese, the Dutch and the British in succession.

Its tree hemmed streets, sun-kissed shores and tall ancient edifices still bear remnants of past eras. And in one such imposing yet unassuming structure is Forte Kochi. Originally built by the Portuguese, the mansion presents a medley of Portuguese, Dutch and British influences and was converted to a magnificent home in the late 1800s. This ancient structure was once part of the palatial home of an eminent Jew family. Now restored to its past glory, this boutique hotel enchants its visitors with glimpses of life once known and lived, centuries ago.

Step into one of the best Heritage Hotels in India and step into an age so far away. 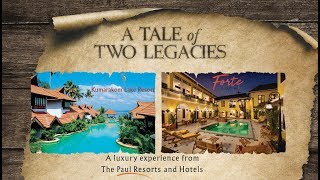